Gustav Hartlaub first used the term ‘New Objectivity’ for his exhibition New Objectivity – German Art after Expressionism, which took place in Mannheim in 1925, bringing together artists committed to ‘tangible reality’. 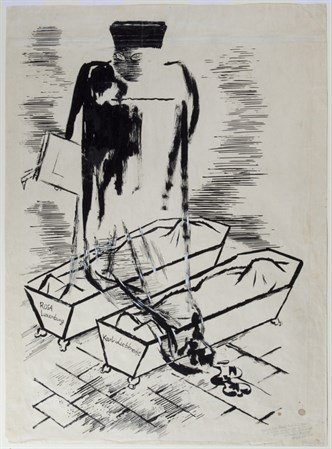 These artists felt that Germany’s defeat in the First World War and the social, political and economic crises of the Weimar Republic (1919-1933) left no place for the early Expressionists’ utopian vision of life. This was replaced by a detached observation of an urban world – busy streets and factories by day, inhabitants of theatres, cabaret and bars by night.

The artists were based in different cities, with wide-ranging subjects and styles - from the left-wing political works of Otto Dix and George Grosz to the cool, motionless landscapes of Alexander Kanoldt. They were however united by their rejection of Expressionism and Abstraction.

Hartlaub wrote ’cynicism and resignation are the negative sides of New Objectivity: the positive side expresses itself in the enthusiasm for immediate reality as a result of a desire to take things entirely objectively, on a material basis, without investing them with ideal implications’.

Under the Nazi regime the progressive direction of German art embodied first in Expressionism, then in New Objectivity was extinguished.