Alexej von Jawlensky was born in 1867 in Torzhok, NW of Moscow, Russia, and died in 1941 in Wiesbaden, Germany.

Jawlensky and Marianne Werefkin came from Russia to Munich in 1896 and soon became friends with Kandinsky. Influenced by Van Gogh and Matisse in France, he developed his style in Murnau from 1908-09 where he lived and worked with Kandinsky, Münter and Werefkin. In 1909 they formed the New Artists Association of Munich.

Jawlensky did not leave the Association with Kandinsky, Münter and Kubin in 1911 when Kandinsky’s abstraction was criticised, so was not asked to exhibit with the Blue Rider artists. However, his radical sympathies were never in question and he exhibited in Herwarth Walden’s Blue Rider exhibition in Berlin in 1913. From 1911 his subjects were mainly the human figure and head.

In 1921 Jawlensky moved to Wiesbaden where he remained for the rest of his life. Here he worked on the representation of the human face. He dropped many of his artistic contacts and his pictures became increasingly abstract and a means of extending his personal religious experience. Jawlensky believed great art could only be painted with religious feeling – ‘Art is a longing for God’.

Head in Black and Green 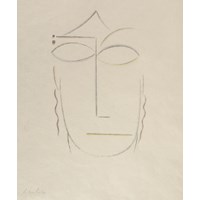