Lotte Laserstein was born in Preussich-Holland, Prussia. One of the first female students to study at the Berlin Academy 1921-27, Laserstein was taught by the painter Erich Wolfsfeld. Through Wolfsfeld, Laserstein encountered the paintings firstly of Adolph Menzel, with their meticulous realism; also of Wilhelm Leibl, the major 19th century German realist painter. An additional influence were the 16th century court portraits of Hans Holbein.

Laserstein won the Academy’s Gold Medal in 1925 and after leaving the Academy in 1927 set up her own studio in Berlin. She exhibited during the late 1920s and 1930s at the Prussian Academy of Art, the Glaspalast, Munich and the Berlin Women Artists Association. In 1931 she held her first solo exhibition at Gurlitt’s, Berlin. Many of her portraits depict independent women in urban settings or in leisure pursuits, emblematic of the ‘Neue Frau’ or ‘New Woman’ of the 1920s and 30s.

In 1934 however, labelled under new Nazi racial laws as ‘Three quarters Jewish’, Laserstein was barred from exhibiting in public, and 1935 she was forced to abandon her studio. Finally in 1937, she emigrated to Sweden. Cruelly this came just as her work began receiving critical acclaim, with two paintings hung in the 1937 Salon in Paris and an exhibition the same year at the Galerie Moderne in Stockholm.

Laserstein's masterpiece was the large (about 8' wide) 1930 painting Abend uber Potsdam (Evening Over Potsdam) or The Rooftop Garden, Potsdam, a frieze of friends enjoying a meal on their terrace, with Potsdam's skyline arrayed in the far distance. The mood is pensive, full of ennui, and the picture achieves the deepest emotion in any of her works.

During her Swedish emigration Laserstein was aided by the Jewish Community in Stockholm, gaining extensions to her entry visa and in 1938, Swedish citizenship. She was unable to save her mother Meta Laserstein however, who was deported in 1942 to Ravensbruck concentration camp, where she died in 1943 aged 75.

Laserstein continued to paint in exile, and throughout the war and beyond she managed to secure numerous commissioned portraits and landscapes, gained through influential Swedish supporters. In the 1950s and beyond however, her life and reputation slipped into obscurity, within a changing post war climate of modernism and abstraction. She lived to see long overdue recognition however, via exhibitions in 1987 at the Belgrave Gallery and Agnew & Sons, London; also a follow-up in 1990 at Agnew’s.

In Germany a major retrospective exhibition held at Das Verborgene Museum, Berlin in 2003, curated by Anna-Carola Krausse returned her life and work to international attention and acclaim. Laserstein’s achievement lies in her uncompromising depiction of unsentimental reality. Her paintings combined her deep allegiance to 19th century realism, but in a modern spirit of her time; a distinct artistic identity acknowledged by Meskimmon, Krausse and others. 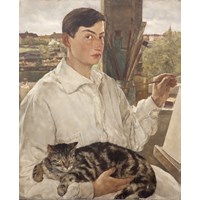 Self Portrait with a Cat 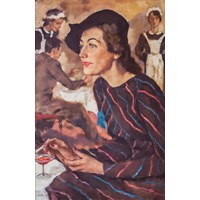 Woman in a Café: Lotte Fischler