Martin Bloch (1883-1954) was born in Neisse, Silesia.  He studied aesthetics with the Swiss art historian Heinrich Woelfflin in Munich and in 1907 he took drawing lessons in Berlin with Lovis Corinth as teacher.

In 1911 Bloch exhibited at the art dealer Paul Cassirer’s Gallery in Berlin. He did not serve during the First World War but lived in Spain between 1914 and 1920. During that time, Spanish landscapes became a predominant subject matter.

He moved back to Berlin and from 1923-33 he ran an art school with Anton Kerschbaumer and Karl Schmidt-Rottluff. After the Nazis had classified his works as “Degenerate Art” in 1933, Bloch left Germany in 1934 and moved to Denmark and England where he opened an art school in London in 1936 with Roy de Maistre.

Martin Bloch became an internationally known artist, and he had his first one-man shows in England at Cambridge and Oxford in 1938, exhibited in the USA in Minneapolis and Princeton in 1948 and had a travelling exhibition between 1952-3 in Canada. Bloch died in London.

Martin Bloch is well-known for his landscape paintings, architectural and city portraits. His works show visible influences by Cézanne.  Although he carefully studied the nature of his motifs, Bloch’s aim was not the naturalistic but the expressive depiction of the subject and his style is affected by form reduction and an exaggerated use of colour.

Laburnum and May Trees 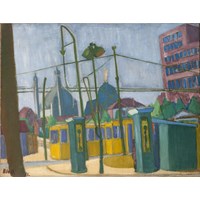 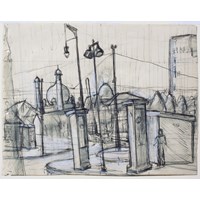