Max Beckmann (1884-1950) was born in Leipzig and studied at the Weimar Academy before he moved to Berlin in 1905, where he joined the “Berlin Sezession” in 1907 and met Liebermann, Corinth and Slevogt.

During the Berlin period, he founded the “Freie Sezession”. Beckmann served together with Heckel in Belgium during the First World War but was discharged in 1915. At the end of the war he moved to Frankfurt where he taught at the “Staedelschule” until he lost the position under the National Socialists regime.

During the late 1920s and early 1930s Beckmann gained international artistic recognition. His first exhibition in the USA took place in 1926, and in 1931 he exhibited in Paris. During the Nazi Regime in 1937 over 500 of his works were condemned as “Degenerate Art” and removed from collections. Some of his works were also shown in the “Degenerate Art” exhibition in Munich in 1937.

He spent the years of the Second World War in Amsterdam and afterwards emigrated to America.

In addition to his paintings, Beckmann is known for prints produced mainly between 1914 and 1923. He created 19 woodcuts, but his preferred techniques were etching and drypoint.

Beckmann’s subject matter varies, ranging from portrait and self-portrait to allegorical depictions. After the First World War his style includes distorted perspectives, hyperbolic use of colour and angularity, and many of his works contain sex, violence, horror and other emotionally moving themes. With the “Neue Sachlichkeit” movement during the 1920s the compositions become more naturalistic, and the main themes are urban life and post-war society. 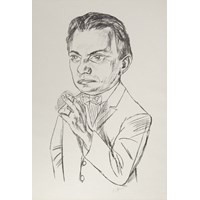 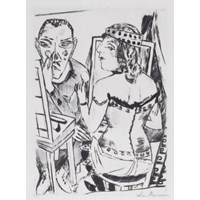 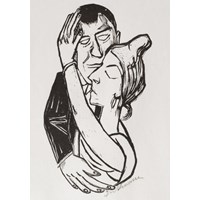 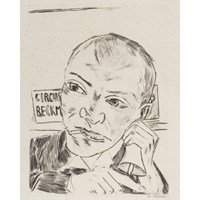