The Swiss painter and etcher settled in Munich in 1906. He exhibited in the second Blue Rider exhibition in 1912 and cemented his friendship with Marc and Kandinsky during the next two years.

Prints and drawings dominate his early work. His breakthrough in the use of colour followed a visit to Tunisia with Macke and Moeillet in 1914. From 1920 to 1931 he taught at the Bauhaus and in 1924 formed The Blue Four with Jawlensky, Kandinsky and Feininger. 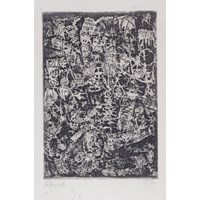