Wassily Kandinsky (1866-1944) was born in Moscow and emigrated at the age of thirty to Munich to study painting. In 1902 he met artist Gabriele Münter with whom he had a relationship until the outbreak of the First World War.

Between 1908 and 1914 both formed a summer colony in Murnau, which included artists such as Jawlensky, Werefkin, Marc and Macke. After leaving the group “Neue Kuenstlerveinigung München” in 1911, Kandinsky and Marc founded the progressive art group “derBlaue Reiter” and published an almanac with the same name.

Kandinksy’s famous theoretical treatise “Uber das Geistige in der Kunst” was published in 1912.  The following year Kandinsky exhibited in the context of the “First German Autumn Salon” in the Gallery der Sturm.

With the outbreak of the First World War Kandinsky was expelled from Germany and he settled in Russia between 1916 and 1921. After Kandinsky’s return to Germany, in 1922 he and Paul Klee became members of staff of the Bauhaus where he taught the painting workshop and basic design course until the National Socialists shut down the school in 1933.

Together with the artist Jawlensky and his colleagues Feininger and Klee, Kandinsky founded 1924 the group “Die Blaue Vier” which organised and mounted exhibitions, and was successful especially in America. After the Bauhaus had been closed, Kandinsky moved to Paris.

In 1937, 57 of his works were confiscated by the Nazis and the Munich exhibition “Degenerate Art” includes Kandinsky’s artworks.

Kandinsky was a painter, printer and art theorist, known for his pioneering theory of abstraction. With Franz Marc he shared the idea of a spiritual approach to art focusing on internal processes rather than on the objective representation of the material world. While his early work was influenced by Jugendstil and Symbolism, from 1907 onwards, form and colour experiments towards reduction and abstraction can be observed. During and after his stay in Russia, his works show a visible influence of the Constructivism Movement and his abstract style becomes increasingly geometric. 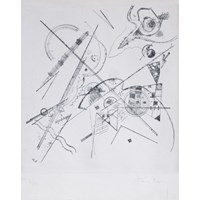 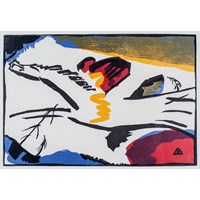