Franz Marc (1880-1916) was a German painter and printmaker born in Munich, where he also studied. During visits to Paris in 1903 and 1907 he discovered French Impressionism and from 1907 onwards he began animal studies, including anatomy and movement.

In 1910 he met and befriended August Macke and Kandinsky and became a member of the “New Artist’s Union” in Munich. In 1911, Kandinsky and Marc founded the group “der Blaue Reiter” and mounted an exhibition under the same name.

The “Blaue Reiter” almanac was produced in 1912 and a further “Blaue Reiter” exhibition was organised in Munich, collaborating with Berlin artists such as the “Brücke” artists Kirchner and Pechstein.

In 1913, Marc co-organised the exhibition “First German Autumn Salon” in the Gallery der Sturm, an important exhibition including European Modernism artworks. With great enthusiasm Marc volunteered during the First World War from 1914 onwards but was killed in 1916 near Verdun.

Posthumously, the National Socialists declared his art as “Degenerate Art” and removed 130 of his works from German museums.

While his earlier work is affected by the “Jugendstil”, Marc’s painting and printmaking style became more expressive.  The aim of Marc, who had turned to nature, was not the depiction of the visible of the human but of the internal of the soul.

From 1910 onwards, animals became a central motif in Marc’s works. Influenced by Robert Delaunay and the Orphism Movement throughout his artistic career, colour became a main element of composition of his paintings and Marc’s works shifted towards abstraction.

Watch a film about Franz Marc. 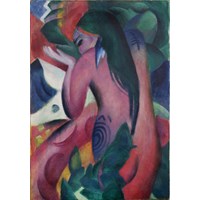 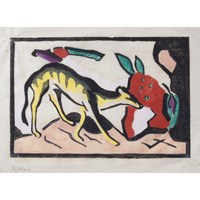 Animal from a Fable 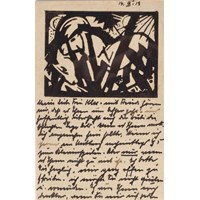 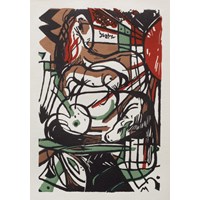 Birth of the Horses 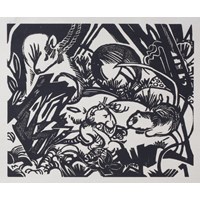