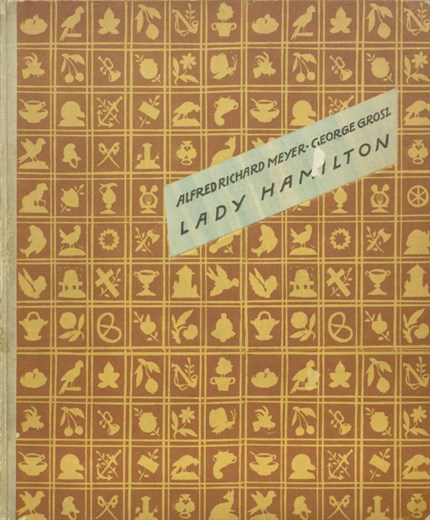 Lady Hamilton or the Posturing of Emma or From Housemaid to Nelsons bit of crackling. A fantastic and romantic travesty by Alfred Richard Meyer. Most industriously fleshed out by George Grosz.

What was the Lady Hamilton Book?

None of the illustrations is titled, but range from Lady Hamilton in various states of undress, either posing as a smiling classical figure, or for Nelson, who in one scene appears in the guise of an unshaven artist at his easel, Emma as his model. Grosz’s hand-colouring variously has Nelson with a red nose or blue stubble, admiring Emma’s red hair, or contemplating a decanter of green absinthe-like liquid.

First edition, limited issue. Number thirty one of the first 50 copies, with eight hand-coloured lithographic illustrations by George Grosz, each signed in pencil by the artist. Berlin: Fritz Gurlitt, 1923. Pencil signature in the endpapers by Alfred Richard Meyer [included in first 50 copies only].